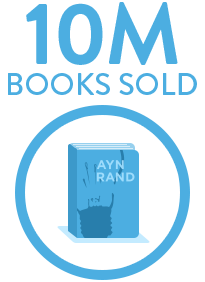 Ayn Rand came of age during the ascendancy of collectivism across the globe — not only in communist Russia, from which she escaped in 1926, but also in fascist Italy, Nazi Germany, and to an alarming degree in her adopted homeland, America. Rand identified collectivism — the idea that individuals should be subjugated to the group and sacrificed for the common good — not only as a moral evil but as the essential cause of the political evils then engulfing the civilized world.

In the summer of 1937, Rand took a break from working on The Fountainhead to write the novelette called Anthem, a short, highly stylized tale of a future dystopia so saturated in collectivism that the word “I” has disappeared from the language.

First published in England in 1938, Anthem was rejected by collectivist-dominated American publishers in the 1930s — an American edition (slightly revised by Rand) did not appear until 1946.

“I got the idea [for Anthem’s theme] in my school days, in Soviet Russia, when I heard all the vicious attacks on individualism, and asked myself what the world would be like if men lost the word ‘I.’”

Anthem is Ayn Rand’s “hymn to man’s ego.” It is the story of one man’s rebellion against a totalitarian, collectivist society. Equality 7-2521 is a young man who yearns to understand “the Science of Things.” But he lives in a bleak, dystopian future where independent thought is a crime and where science and technology have regressed to primitive levels.

All expressions of individualism have been suppressed in the world of Anthem; personal possessions are nonexistent, individual preferences are condemned as sinful and romantic love is forbidden. Obedience to the collective is so deeply ingrained that the very word “I” has been erased from the language.

In pursuit of his quest for knowledge, Equality 7-2521 struggles to answer the questions that burn within him — questions that ultimately lead him to uncover the mystery behind his society’s downfall and to find the key to a future of freedom and progress.

Anthem anticipates the theme of Rand’s first best seller, The Fountainhead, which she stated as “individualism versus collectivism, not in politics, but in man’s soul.”

“It is dark here. The flame of the candle stands still in the air. Nothing moves in this tunnel save our hand on the paper. We are alone here under the earth. It is a fearful word, alone. The laws say that none among men may be alone, ever and at any time, for this is the great transgression and the root of all evil. But we have broken many laws. And now there is nothing here save our one body, and it is strange to see only two legs stretched on the ground, and on the wall before us the shadow of our one head. . . .

“We stole the candle from the larder of the Home of the Street Sweepers. We shall be sentenced to ten years in the Palace of Corrective Detention if it be discovered. But this matters not. It matters only that the light is precious and we should not waste it to write when we need it for that work which is our crime. Nothing matters save the work, our secret, our evil, our precious work.”

Equality 7-2521 tells us he is a sinner and criminal. But what crimes has he committed? Being alone, writing, having personal preferences. He is “cursed” with an active, questioning mind in a society where every institution aims to crush independence and instill obedience to the authority of the collective.

Intelligent and inquisitive, Equality 7-2521 longs to become a scientist and devote his life to discovery and invention. Instead, he is beaten by his teachers and assigned the life work of street sweeper. When, against all odds, he rediscovers the secret power of a lost relic from the ancient past, he must confront the full reality of his society’s ideals.

Fleeing his society, Equality 7-2521 comes to see that his “curse” is actually his greatest virtue — his independent, rational mind — and that it is his society’s collectivism that must be rejected in defense of the sacred value of man’s ego.

He first sees her working the fields with the women from the House of the Peasants. But in contrast to most members of his society, who are hunched and bowed, broken, dull, and consumed by fear, Liberty 5-3000 is proud, scornful, strong-willed and defiant, with a body “straight and thin as a blade of iron” and eyes that are “dark and hard and glowing, with no fear in them.”

Like Equality 7-2521, Liberty 5-3000 has the courage and independence of judgment to defy her society’s laws, which forbid men and women to think of one another, let alone to speak personally or pursue a romantic relationship.

When Equality 7-2521 flees into the unknown, Liberty 5-3000 follows him, leaving the only life she’s ever known and risking death to pursue her highest value.

Collectivism, in Ayn Rand’s view, is the belief that the individual should be subjugated to the group and sacrificed for the common good. Anthem depicts the evils to which collectivism leads when implemented consistently.

In Anthem’s totalitarian society every aspect of life is dictated by the state. People are told when to wake, when to eat, when to work, when to sleep. Enslaved to all mankind, they have no freedom to choose their work or anything else.

But these political evils are possible, in Rand’s view, only because the people in Anthem accept collectivism as a moral ideal: It’s not just a crime to be alone or to have personal values, it’s a sin — a moral transgression.

They’ve adopted collectivism so fully they can’t even see themselves as individuals, only as members of a group. And by embracing this as an ideal, they’ve become accessories to their own enslavement.

Anthem is not just a forceful indictment of collectivism. It is, first and foremost, a celebration of individualism — a “hymn to man’s ego.”

When Ayn Rand came to America in 1926, she expected to find alive the ideas of the Founding Fathers: that each individual has the right to live for his own sake and to pursue his own happiness. Instead, with socialism dominant among American intellectuals, she found growing statism fueled by the same collectivist slogans she’d heard in Soviet Russia.

What was lacking, in her view, was a clearly defined ethic of individualism: a moral viewpoint in which the individual’s own life is held as sacred.

Anthem was her first expression of her new moral philosophy, according to which the moral ideal is not to sacrifice for others, but to live for oneself and to view the pursuit of one’s own happiness as one’s highest moral purpose.

“In popular usage,” writes Rand, “the word ‘selfishness’ is a synonym of evil.” It is assumed to mean the pursuit of one’s own ends at the expense of others, i.e., the exploitation of other people.

In Anthem (and her later works) Rand puts forward a new concept of selfishness, according to which each individual lives for his own sake, neither sacrificing himself for others, nor sacrificing others to himself. She celebrates the creation of a genuine ego — Equality 7-2521’s acquisition of basic, personal, life-affirming values — and champions the pursuit of one’s own happiness as one’s highest purpose in life.

Anthem is set in a distant future more primitive than Europe’s Dark Ages. Technology and scientific knowledge have been lost. The tallest building is only three stories, sundials keep time, and the newest modern invention is the candle. The “Old Ones” make vague reference to “towers which rose to the sky,” “wagons which moved without horses,” “lights which burned without flame” and other “strange things” from the past.

What accounts for this collapse? Rand’s explanation is that scientific and technological progress is incompatible with the collectivist mindset of passive obedience to the group. Progress requires individuals who are willing to exercise independent, rational thought and are free to innovate based on that thought.

Historically, the replacement of reason with faith caused the achievements of Greece and Rome to be buried and forgotten during centuries of stagnation and starvation. Rand projects the same cause leading to Anthem’s fictional Dark Age.

One striking feature of Anthem’s world is the corruption of language: the loss of singular pronouns. This linguistic deterioration is not just an expression of the philosophy of collectivism, but also a method by which that philosophy is inculcated and enforced.

In Rand’s view, concepts, held in the form of words, are not just means of communication — they are the tools we use to grasp the world and think. A man who doesn’t have the concept “I” — who can only ever speak in terms of “we,” “they” and “ours” — can hardly think of himself as an independent, individual human being, let alone contemplate the value and meaning of the self, or ego.

In her later philosophical writing, Rand formulated a comprehensive theory of concepts — what they are, how they’re formed and misformed, and how they enable us to grasp the world around us. 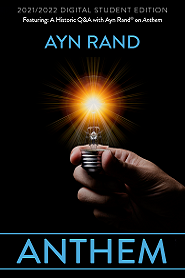 Eligibility: Offer available for all students worldwide. (Must provide proof of school enrollment within past 3 months.)
Format: Book is provided in digital format via Google Play Books.