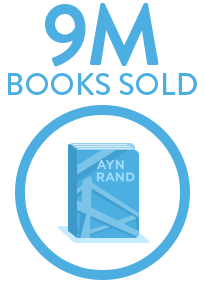 What motivates a creative thinker?

Is it a selfless desire to benefit mankind? A hunger for fame, fortune, and accolades? The need to prove superiority? Or is it a self-sufficient drive to pursue a creative vision, independent of others’ needs or opinions?

Ayn Rand addresses these questions through her portrayal of Howard Roark, an innovative architect who, as she puts it, “struggles for the integrity of his creative work against every form of social opposition.”

Initially rejected by twelve publishers as “too intellectual,” The Fountainheadbecame a best seller within two years purely through word of mouth, and earned Rand enduring commercial and artistic success.

The novel was also a personal landmark for Rand. In Howard Roark, she presented for the first time the uniquely Ayn Rand hero, whose depiction was the chief goal of her writing: the ideal man, man as “he could be and ought to be.”

“Readers have asked me whether there is a real prototype of Howard Roark. Literally — no. Essentially — yes. Every man who has an innate sense of independence and self-respect, and a spark of the creative mind, has that much of Roark in him.”

— Ayn Rand, “To the Readers of The Fountainhead,” Letters of Ayn Rand

In her first notes for The Fountainhead, Ayn Rand describes its purpose as “a defense of egoism in its real meaning . . . a new definition of egoism and its living example.” She later states its theme as “individualism versus collectivism, not in politics, but in man’s soul; the psychological motivations and the basic premises that produce the character of an individualist or a collectivist.”

The “living example” of egoism is Howard Roark, “an architect and innovator, who breaks with tradition, [and] recognizes no authority but that of his own independent judgment.” Roark’s individualism is contrasted with the spiritual collectivism of many of the other characters, who are variations on the theme of “second-handedness” — thinking, acting, and living second-hand.

Roark struggles to endure not merely professional rejection, but also the enmity of Ellsworth Toohey, beloved humanitarian and leading architectural critic; of Gail Wynand, powerful publisher; and of Dominique Francon, the beautiful columnist who loves him fervently yet is bent on destroying his career.

The Fountainhead earned Rand a lasting reputation as one of history’s greatest champions of individualism.

“Have you thought of your potential clients?”

“The Client,” said the Dean. “The Client. Think of that above all. He’s the one to live in the house you build. Your only purpose is to serve him. You must aspire to give the proper artistic expression to his wishes. Isn’t that all one can say on the subject?”

“How do you propose to force your ideas on them?”

“I don’t propose to force or be forced. Those who want me will come to me.”

Expelled from a prestigious architectural school for his unconventional designs — denied work because of his refusal to compromise his creative principles — opposed by the architectural critics, his professional colleagues, his whole society — reduced, at one point, to laboring in a granite quarry — is Howard Roark a selfless martyr to an artistic ideal?

Or does he embody a new concept of self-interest — one that places nothing above the rational judgment of his independent mind? Will Roark’s unbreachable integrity lead him to sacrifice his goals to his creative vision, or will it prove to be the means by which he ultimately achieves his goals in his career and life?

In the story of Howard Roark and his struggle against a tradition-worshipping society, Ayn Rand offers, as she puts it, “a demonstration of how the principles of egoism and altruism work out in people and in the events of their lives.”

“The egotist in the absolute sense is not the man who sacrifices others. He is the man who stands above the need of using others in any manner. He does not function through them. He is not concerned with them in any primary matter. Not in his aim, not in his motive, not in his thinking, not in his desires.”

Peter Keating and Howard Roark room together in architecture school, and set off on their careers at the same time. But they couldn’t be more different in their motives and choices.

Affable, yet desperate for social approval, Keating covets fame and wealth, and is willing to do whatever it takes to get them. Scheming and backstabbing, Keating manipulates his way to the top of his firm and the architectural profession, attaining everything he ever sought. But what has he achieved when he finally gets there?

“It’s a secret, Howard. A rare one. I’ll give it to you free of charge with my compliments: always be what people want you to be. Then you’ve got them where you want them. I’m giving it free because you’ll never make use of it. You’ll never know how.”

Ellsworth Toohey is an influential columnist and architectural critic, whose praise or censure can make or break an architect’s career. He recognizes that Peter Keating is, at best, a mediocrity, while Howard Roark is an innovative genius. So why does Toohey do everything in his power to boost Keating’s career while plotting and scheming to destroy Roark’s?

An arch-exponent of the morality of altruism, Toohey preaches self-sacrifice and service to others at every opportunity. What does that have to do with architecture — or with literature, theater or other artistic fields with which Toohey also concerns himself?

By the end of The Fountainhead, you’ll discover what it is that Toohey is really after, and understand why he is Ayn Rand’s embodiment of collectivism “not in politics, but in man’s soul.”

Gail Wynand is publisher of the New York Banner, and the owner of a powerful media empire. Brilliant and tireless, he rose from the slums of Hell’s Kitchen to wealth and influence. He has the discernment to appreciate artistic greatness but the success and influence of his newspapers were achieved by pandering to the public taste, feeding the public’s hunger for vulgarity and sensationalism.

In Wynand’s view, a man’s only choice in life is to rule or be ruled, and he has dedicated himself to the pursuit of power over men by establishing his newspapers as the voice of public opinion.

What will happen when Wynand meets Roark and tries to fight for something he sincerely believes in? Who is the truly selfish man and what is the source of his actual motivation and power?

Dominique Francon is torn by a powerful internal conflict. She is a passionate idealist who worships human greatness, creative genius, the heroic in man — but she is also convinced that such greatness is doomed to defeat in a world ruled by the mediocre.

What she seeks most of all is to avoid any values that would tie her to the world, any objects of reverence whose destruction she would have to watch. Rather than witness the suffering and drawn-out failure of the ideal, she would prefer to destroy it herself, as a kind of mercy killing.

Thus, although she is desperately in love with Howard Roark, she allies with Ellsworth Toohey in a campaign against Roark, working to convince clients not to hire him and doing everything she can to end his career. How far will she go? And is she right about the world?

“Roark, I can accept anything, except what seems to be the easiest for most people: the halfway, the almost, the just-about . . . . When I think of what you are, I can’t accept any reality except a world of your kind. Or at least a world in which you have a fighting chance. . . . That does not exist.”

When readers first encounter Howard Roark, one of the qualities they find so striking is his utter independence. In every area of his work and life — from his views on architecture to his career plans to his choice of friends — he thinks for himself, judges for himself, and makes decisions based solely on his own thinking and judgment.

Roark does learn from others — such as the architect he most admires, Henry Cameron, and some of his teachers at school — but not by passively accepting their ideas on authority.

And Roark does work with others — the clients who hire him to design their buildings, and the employees and contractors he hires to build them — but only on terms he thinks are correct.

What Roark exemplifies is Rand’s concept of independence as the “acceptance of the responsibility of forming one’s own judgments and of living by the work of one’s own mind.”

Before calling it The Fountainhead, Ayn Rand’s working title was “Second-Hand Lives.” Her idea for the book was to contrast the first-handed independence of her hero, Howard Roark, with other characters who are variations on the theme of second-handedness.

These “second-handers” all exhibit a basic dependence on others, whether in the form of seeking social approval as the measure of their own worth, or of following the opinions of others as authoritative, or of trying to dominate others in a quest for power. One of Rand’s unique insights is the idea that the pursuit of power is really just a different form of dependence on those one seeks to rule.

Because “Second-Hand Lives” emphasizes the novel’s villains, not its hero, Rand changed the title to highlight that it is the firsthand thinking of history’s great creative minds that is the fountainhead of human progress.

“The Fountainhead,” wrote Ayn Rand, “started in my mind as a definition of a new code of ethics — the morality of individualism. The idea of individualism is not new, but nobody had defined a consistent and specific way to live by it in practice. It is in their statements on morality that the individualist thinkers have floundered and lost their case. They had nothing better to offer than vulgar selfishness which consisted of sacrificing others to self. When I realized that that was only another form of collectivism — of living through others by ruling them — I had the key to The Fountainhead and to the character of Howard Roark.”

The Fountainhead offers a radical rethinking of basic moral concepts. In particular, it rejects the conventional notion that selfishness involves harming and exploiting others. What Roark embodies is Rand’s new concept of selfishness, portrayed, not as a vice, but a virtue.

The architectural profession, in the novel, is dominated by tradition-worshippers, whose approach to designing buildings is to copy the architectural styles of the past. These “second-handers” reject and oppose the work of Howard Roark, a creative innovator with a unique artistic vision. (Roark’s designs “were not Classical, they were not Gothic, they were not Renaissance. They were only Howard Roark.”)

Roark’s conflict with his profession is the struggle of any independent thinker against conformity and resistance to the new and untried: “the thinkers, the artists, the scientists, the inventors” who “stood alone against the men of their time.” Despite the opposition they face, such thinkers create all the unprecedented values that advance human life. The Fountainhead celebrates the heroism of the “men who took first steps down new roads armed with nothing but their own vision.”

A core tenet of Ayn Rand’s philosophy, Objectivism, is the importance of a central, productive purpose in an individual’s life.

In The Fountainhead this is concretized by Howard Roark’s creative drive and his passion for his work. What motivates Roark is not a craving for wealth or social approval, but the intellectual challenge of solving architectural problems and the artistic drive to create structures of beauty.

This is in stark contrast to Peter Keating, who merely goes through the motions of productive work. Keating’s focus is on achieving success in the eyes of others — on being regarded as a great architect — not on creating buildings he genuinely and personally values.

Keating’s spiritual emptiness stems, partly, from his lack of a central, productive purpose, which, in Rand’s view, is what “integrates and determines the hierarchy of all [of a man’s] other values.”